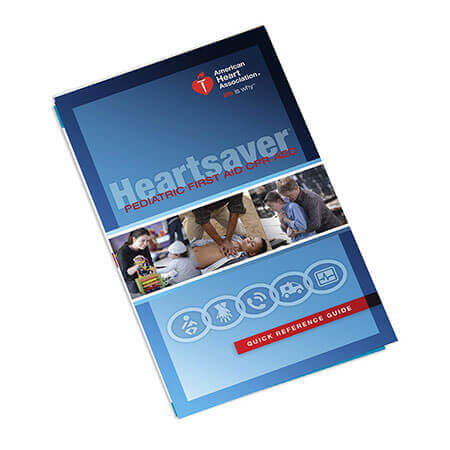 100% classroom training means students are with an AHA Instructor for their entire learning experience.

Heartsaver Pediatric First Aid CPR AED is a classroom, video-based, Instructor-led course that teaches students to respond to and manage illnesses and injuries in a child or infant in the first few minutes until professional help arrives.

This course is designed to meet the regulatory requirements for child care workers in all 50 U.S. states.

Our class will equip you and your staff with the knowledge and skills necessary to effectively handle a child or infant medical emergency.

All childcare professionals (including home childcare, nannies, daycare centres, etc.) are required to have a current CPR and First Aid certification.  This certification is renewed every 2 years.  Babysitters (including teens) are strongly recommended to also get certified. Our CPR/AED and First Aid programs meet and exceed all state or county licensing recommendations and/or requirements.

We offer a complete CPR training in an enjoyable and educational environment, providing more than just the information, also instilling the confidence needed to handle any emergency. Our classes include CPR for adults, infants, and children. Instruction on airway obstructions and proper use of an AED are included in both the instruction and skill testing.

Our Pediatric CPR/AED and First Aid certification program meets the 2015 ECC standards set by the American Heart Association.  Advanced CPR Training provides onsite training to your group of 5 or more or individuals can register for one of our many classes.

As a childcare center or provider, you know how important it is to be prepared for every situation that might arise.  American Heart Association Pediatric CPR AED and First Aid certification is a perfect option.

Tuberculosis (TB) is an infectious disease caused by bacteria. TB most commonly affects the lungs but also can involve almost any organ of the body. Many years ago, this disease was referred to as “consumption” because without effective treatment, these patients often would waste away. Today, tuberculosis usually can be treated successfully with a medication regimen.

WHAT ARE THE SYMPTOMS OF TUBERCULOSIS?

People with tuberculosis may experience symptoms similar to the flu, or no symptoms at all, in the early stages. Advanced symptoms include weight loss, chronic fatigue and heavy sweating, especially at night. In the later stages, people with tuberculosis can develop a cough with mucus that becomes progressively thick, bloody or yellow, chest pain, shortness of breath and possibly red or cloudy urine.

Tuberculosis testing, also known as the PPD test, is a skin test used to determine if someone has developed an immune response to the bacterium that causes tuberculosis (TB). This response can occur if someone currently has TB, if they were exposed to it in the past, or if they recently received the BCG vaccine against TB (which is not performed in the U.S.) A positive response to a TB skin test does not mean that you have active TB. Rather it means that you have been exposed to TB and need further evaluation.

A TB test is performed by injecting a small amount of fluid that contains components of the TB organism under the skin. If a patient has been exposed to TB before or has received the BCG vaccine, the patient will react to the injection by forming a hard, raised area at the injection site.

The patient needs to be available 48-72 hours after the injection, at which time the healthcare provider will examine and measure the injection site to determine if the patient does or does not test positively for exposure to tuberculosis. Further evaluation is needed if a TB test shows a positive reaction. Blood tests and x-rays are needed to confirm an active infection. State regulations require healthcare providers report suspected or diagnosed TB to state health departments.

This can be performed with CPR Training or on an individual basis.

Stay up to date with special offers and tips.